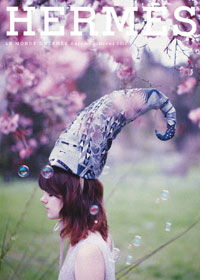 Olivia Bee, a guest of the Monde du Hermès. The very young American photographer Olivia Bee (18) creates a world between candour and cockiness with her creations, a bucolic world where she reinterprets fairy tales with the coolness and adolescent impertinence. For Hermès, she is creating a silk world to which Le Monde du Hermès magazine is devoting several pages. In a rustic and enchanted atmosphere, Olivia Bee plays with Hermès scarf: it is tied on fluorescent and ruffled hair, on a horse or a young woman on an evening stroll. To discover in the autumn-winter 2012 edition in Hermès stores.
www.hermes.com 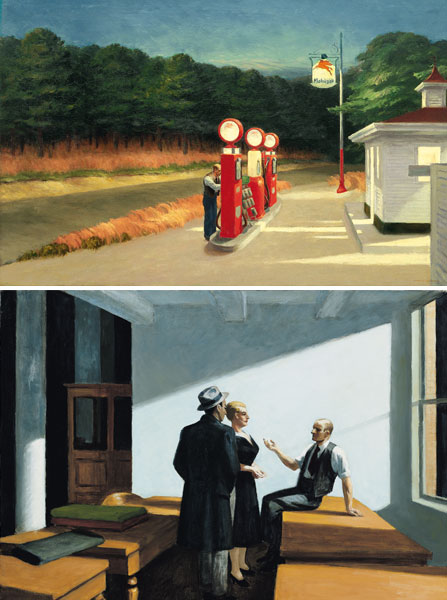 “Edward Hopper” at the Grand Palais. The paintings of the American Edward Hopper have the deceptively simplicity of myths, evidence of the images of Epinal. Each is a compendium of the hypothetical thoughts and dreams that inspire America. The expression of more poignant feelings or pure mental constructs, these paintings give rise to the most contradictory interpretations. Romantic, realistic, symbolist and even formalistic, Edward Hopper has been put in all these categories at one time or another. It is this complexity and the richness of the work that this exhibition aims to shed light on.
From 10 oct. 2012 to 28 janv. 2013
www.grandpalais.fr 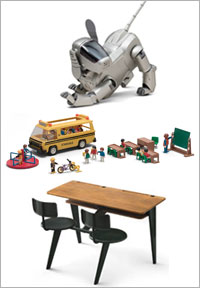 “The Century of the child: growing by design” at MoMA. The reformer of Swedish design and social theorist, Ellen Key has defined the twentieth century as « “the century of the child.” And so it is in response to this theory that MoMA aims, with the exhibition, “The Century of the child: growing by design, 1900-2000 », to trace a century of creations dedicated to children. Furniture, toys, and advertising that shaped the experience of twentieth century children and taught them to be part of a world undergoing constant change. A wide range of objects, posters and videos illustrates how progressive design has formed the physical and emotional development of children. And, conversely, how playing styles and pedagogy inspired design. Exciting.
Until 5 November 2012
www.moma.org 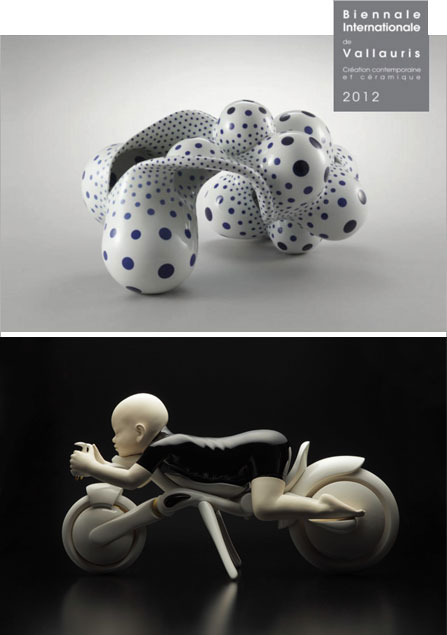 International Biennial of Vallauris. On the occasion of its 22nd year, the International Biennial of Vallauris is once again putting contemporary design and ceramics in the spotlight by way of seven exhibitions in the city and an honoured guest, Japan. And so, at the Musée Magnelli, Shigeki Hayashi presents his works, inspired by science fiction, animation and Manga. The installation, entitled “OO” displays the figures that are most dear to the artist. Frozen faces, without expression, an army of Koz-o clones or from Q.P. the series appear stripped of their astronaut costumes, in order to get moving on motorcycles. Hyperrealism in the treatment of the characters and vehicles emphasizes the mastery of technical ceramics in detail.
Until November 12
www.vallauris-golfe-juan.fr 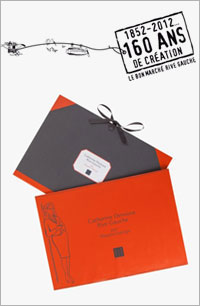 Le Bon Marché celebrates
160 years. The celebration of 160 years since the creation of Bon Marché Rive Gauche has begun. On the program is an onslaught of ideas, each more chic than the next: ten pop up windows on the rue de Sèvres, the launch of a collector’s box of ten “Catherine Deneuve Rive Gauche” drawings by Marjane Satrapi (limited edition of 160 signed and numbered copies) and the screening of the Loïc Prigent film “Catherine Deneuve Rive Gauche” in a temporary movie theatre installed on the ground floor of the store. Not to mention other cultural exhibitions installed throughout the different floors…Obviously, the building itself has not been forgotten since its windows are being dressed up with spectacular mobile displays and a custom-made neon light will illuminate the roof. On Saturday, September 22, Marjane Satrapi will be present at the store to sign her boxes, from which a portion of the profits will be donated to the Necker-Enfants Malades hospital.
www.lebonmarche.fr 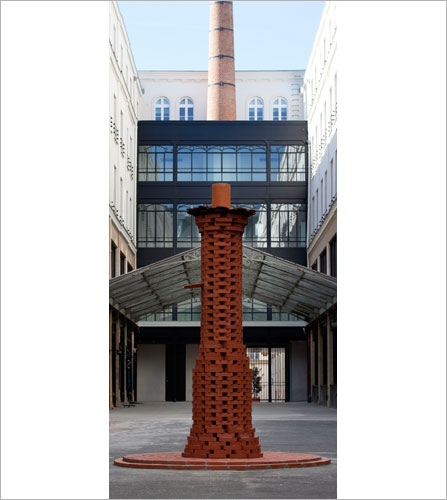 “Brique It” at the Lieu du Design. It is red, simple, cheap, popular, reusable, flexible, durable…For its second season at the Lieu du Design, the association Particule 14 is combining the talents of 13 artists around a sober, efficient and universal module – the brick. In an increasingly dematerialized world dominated by the technological object, this challenge has stimulated the creativity of artists. The project, far from playing on nostalgia, has opened up many possibilities to play with balance, series, fullness and emptiness, and the material surface. For the energy group Particule 14, the story of design is explained with the brick. Until 22 September 2012. www.lelieududesign.com 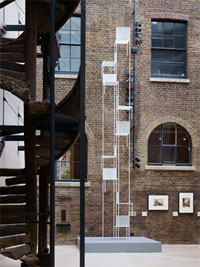 “Mimicry Chairs” at the Victoria & Albert Museum, London. Lying somewhere between contemporary art and design, Japanese design firm Nendo currently has an installation at the Victoria & Albert Museum featuring some very unique Mimicry chairs. The philosophy of the project, as a part of the London Design Festival, is based on the reinterpretation and the multiplication of a single white chair created from pressed and perforated metal, painted white, in ten different ways. The series appears in ten different locations in the V & A Museum. At each site, the Mimicry chair is modified to mimic the space it inhabits and the objects around it.
www.vam.ac.uk 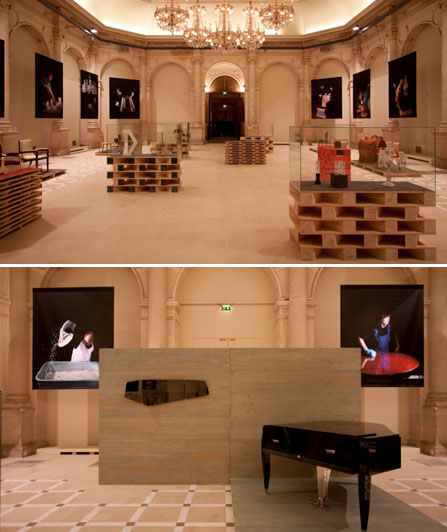 “Le dessin du geste” at the Hotel de Ville in Paris. The purpose of this exhibition is to show that successful manufacturing is actually the result of controlled action, a well-formulated plan and relevant entrepreneurial drive. It seeks to aid the visitor in understanding the scope of collaboration between artists and design with the expertise of 26 large French companies. For each one, two pieces are put in dialogue: a heritage object and an object created in collaboration with a contemporary French designer. And so, each pair expresses a lineage and illuminates one or more axes of innovation: material, form, usage, technology, market…
Until October 10, 2012.
www.ledesseindugeste.com 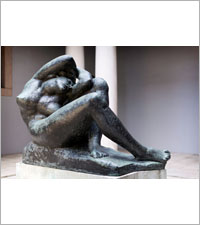 “I, Ivan Mestrovic, Slave” at the Musée Rodin. In 1902, Croatian sculptor Ivan Mestrovic met Auguste Rodin in Vienna, where he studied at the Academy of Fine Arts before coming to settle in Paris. It was there that he developed his powerful style, at the crossroads of various influences. His work, relatively unknown in France, synthesizes tradition and new movements into a profound human expression. As part of the Croatian season, which will include around forty demonstrations in Paris, twelve works of Ivan Mestrovic – mostly in bronze – will be presented in the court of honor of the museum.
From 18 September 2012 to 6 January 2013.
www.musee-rodin.fr 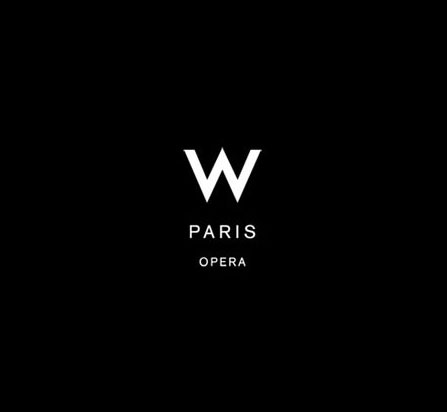 The W Paris-Opéra kicks
off Paris Design Week From the 10th
to the 16th of September, for the occasion of Paris Design Week, the W Paris-Opéra is transforming into a veritable stage of artistic expression, in a creative and friendly fashion. The hotel has created a dynamic dialogue between the historic facade of the building a symbol of Paris the ‘city of light’ and the vibrant energy of New York with the sparkling wall “The Spark”. 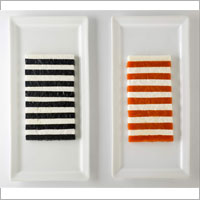 Pierre Gagnaire at work during the FIAC. Passionate about modern and contemporary art, three-star Michelin chef Pierre Gagnaire has put on an artistic display of prints by Eduardo Chillida and Richard Serra, a sculpture by David Nash, and watercolours by Günther Förg in his rue Balzac restaurant…During the FIAC, from October 18th to the 21st at the Grand Palais, Gagnaire will be offering a lunch menu that has been designed in homage to his favourite artists who have inspired some of his recipes: Rousseau, Cy Twombly and even Daniel Buren for the Navet Buren. “This dish is a nod to an amazing artist, who is at once rigorous, soft and tenacious in his discourse, but the result is always there, waiting for you. It’s beautiful!” declared the chef.
www.pierre-gagnaire.com
©Inspiration Buren-Pierre GAGNAIRE

The 21st Festival du Vent in Calvi. Founded in 1992, one month after the Rio Summit, the Festival du Vent in Calvi was born of the desire to live the same experience as the artists, scientists and athletes gathered at Calvi. From the 27th to the 31st of October, exhibitions, debates, street theatre and sports demonstrations allow festivalgoers to share points of views and convivial moments focusing on environmental issues and eco-citizenship..
www.festivalduvent.com