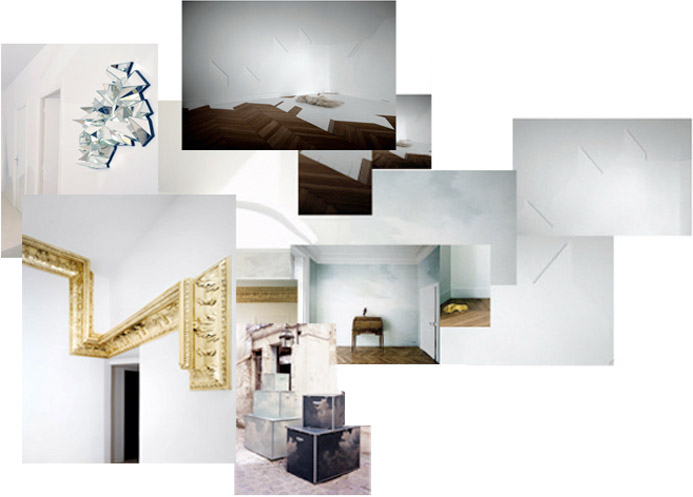 Artist, architect, designer, sculptor of space, highlighter of a moment, magician of the full and the empty, an embellisher of surfaces. Mathias Kiss is a manufacturer of shapes for the emotions… Whatever he touches turns to gold. Originally from Compagnons, the founder of Attilalou along with his friend Olivier Piel, creates a vibrant homage to the Arts Décoratif and their traditions within each painting, each installation, each project and each object, in order to better decipher them and to encourage them to move away from their classic forms.

As the cornice comes out from the ceiling, it starts to mould and runs along the wall, turning in right angles, winding, excessive and gold. It covers the entire wall. Hereby, leaving its role as a cornice, to become a work of art. The piece is structured in an entirely different way, altering all the usual codes. Made of plaster cast, in an antique style, it successfully escapes the confines of traditional design, bringing a freedom of movement and a new rhythm…It’s the latest piece by Mathias Kiss. An apprentice-painter for eleven years, with thirteen years at Compagnons, he has painted skies, restored mouldings and covered cornices with gold leaf for ten years.

Since he created Attilalou in 2002, in order to give life to his own creations and to break away from the mould, his clients, such as Nicolas Gaudin of Air, Stefano Pilati, and architects, such as India Madhavi and Gilles&Boissier, have given him carte blanche. For the owner of the Teisso gallery in Paris, he created Banquise (cover photo), a sculpture-painting, which is curved and transparent like a projection light. The piece blurs the boundary between the wall and the floor, beginning on the wall, and spilling onto the floor, simultaneously filling the roles of structure and sculpture. An expression of the full and the empty, between the existing and the non-existing.

For another client, he developed the Igloo sofa as a logical evolution of Banquise. They are a part of the same family. The mirror, Plis, is too. A technical triumph achieved through origami and an effect created by folding paper, the mirror is a amalgamation of angles, points, voids and rhythm. A true example of architecture. Like a piece of music, the mirror unfolds into a succession of unique, varied rhythms, as though Matthias Kiss had written a musical score and realised it in 3D. He creates what doesn’t exist, and solidifies what he doesn’t see. He continues to paint skies outside of the traditional confines, over entire walls, trunks, furniture, as well as creating one specially for the tenth anniversary of Japanese brand Tsumori Chisato. A thing of the past at present…