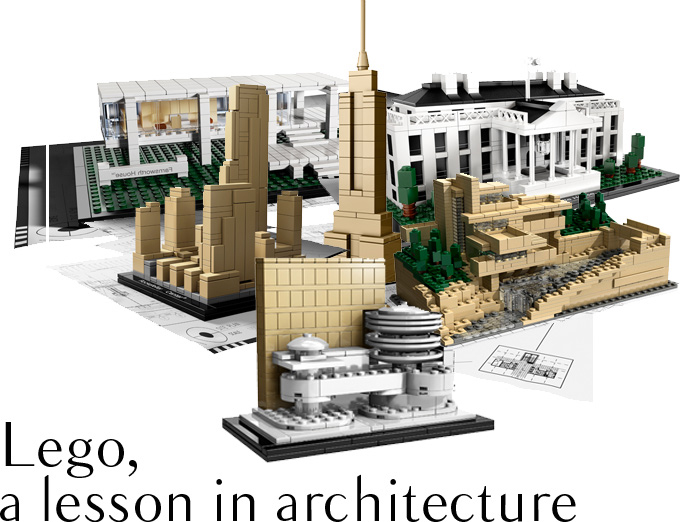 With the Architecture range, Lego celebrates the past, the present and the future of architecture by using the famous mini brick as an element. It is the fruit of collaboration between the group and Adam Reed Tucker, an architect based in Chicago

“As an artist, my objective is to successfully seize the essence of a particular monument in its purely sculptural form. I don’t consider my models to be exact replicas, but rather like my own artistic interpretation, thanks to the use of Lego bricks,” explains Adam Reed Tucker. The American architect has grown up with these celebrated bricks. The joy of constructing monuments, in meticulously assembling these bricks one by one, has been a determining factor of influence in the choice of his future profession. Lego brought him that missing blast of inspiration later on in life, which was a turning point in his career.

Lego Architecture is an enjoyable, educational and attractive concept. Each box enables one to build a famous monument, whilst referring to an extensive archive of historical documentation, information, as well as photographs of the original plans and of the architect and it’s characteristics. It’s enough to make an adult rediscover their inner-child or even to discover a new vocation, as Adam Reed Tucker did.

Launched exclusively in Bon Marche Rive Gauche, the Architecture collection will be an opportunity to admire a special exhibition on unreleased models (from June 11th to August 12th 2011). There are some real large scale reproductions of models from the range: the Empire State Building, the Rockefeller Center, Fallingwater, the Solomon R. Guggenheim Museum and Farnsworth House… A superb journey amongst some of the most beautiful American architectural realisations.