Known as the business city of Morocco, Casablanca is also a sun spot and perfect for a two day city break.
Resolutely modern, with its buildings, thriving business districts, contemporary art galleries, fashionable restaurants and its brand new tramway, opened on 12.12.12 by King Mohammed VI, the white city has not however neglected any of its traditions and cultural heritage.


As evidenced by the new Hassan II mosque and the multitude of artisans who created and built – with their secular art – a monument facing the ocean and the sky, worthy of a thousand and one nights.


Whilst staying at the brand new Sofitel Tour Blanche hotel, we sought the advice of Thomas Greggory, the young general manager of the hotel who moved to Casablanca a year and a half ago, and took a peek inside his city address book.

Casablanca, or Dar el Beida also known as the White City, located on the Atlantic coast, 80 km south of Rabat
Population: 3728 824 inhabitants in the region of Grand Casablanca
Area: 386.14 km2
What to see: the Festival of Casablanca in July, an international music festival
Became legendary thanks to the film “Casablanca” directed by Michael Curtiz in 1942 with the legendary couple Humphrey Bogart and Ingrid Bergman.
Celebrities such as Jean Charles de Castelbajac, Gad Elmaleh, Martine Sitbon and Alain Souchon are native to this city. 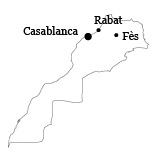