On the heels of the Beatles… 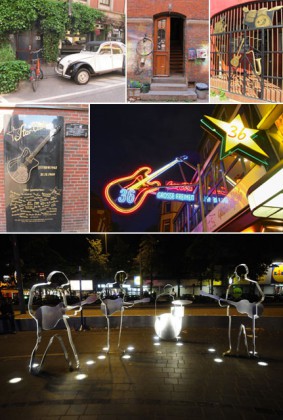 They are recognised by their true fans but may be missed by many: it is in Hamburg that the ‘Fab 4’ came into being! In 1960, when John, Paul and George first landed here, accompanied by Stuart Sutcliffe, the ‘5th Beatle’ who passed away prematurely aged 22 in Hamburg, the boys were nothing more than a bunch of teenagers without much talent. They disembarked at this port, populated by marines on stopovers, for their first professional engagement. Here, they performed almost 300 concerts until their departure in 1962. It was a record for their career, playing more gigs here than any other city in the world, even their dear Liverpool. It is here that they met Ringo and defined their own personal style. Stefanie Hempel offers a formidable tour that traces the Beatles history through the streets of Sankt Pauli. Ukulele in hand, she guides die-hard fans through strip clubs where the foursome started out and places where they lived, often in a very precarious, rock’n’roll fashion! But above all, this walk allows you to learn how the group evolved. When they first landed in Hamburg, the Beatles worn black leather jackets, boots and an Elvis grin! They performed standard rock tunes by their 1950s idols. In short, they were closer to a popular dance group! But in Hamburg, they rubbed shoulders with the likes of the Existentialists. Astrid Kircherr is one of these figures who encouraged the lads to writes their own songs and seek out their own style. ‘You should wear your hair long at the front and classic suits’, Astrid suggested one day, instantly defining their unique look. Roaming the streets and following in their footsteps takes you back to an exciting time.