REINFORCED CONCRETE AND TRADITIONAL DECOR FOR THE HASSAN II MOSQUE 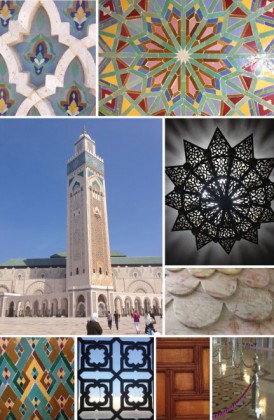 Built partly on the sea, the Hassan II mosque combines three elements beneficial to life: water, air and earth, with a roof that can open in five minutes. The third largest mosque in the world, it is also the tallest religious edifice with its 210 feet high minaret.

Built between 1986 and 1993 by the French company Bouygues, it covers nine hectares and required 50 million hours by 35,000 workers and can accommodate 10,500 worshipers. Fountains and marble vanities, cedar wood and plaster sculptures, chandeliers, wall zellij and tadelakt were made by craftsmen recruited from all the cities of the kingdom.

All of Moroccan craftsmanship is represented in this masterpiece that has managed to combine tradition and modernity. Aluminium tiles replaced the traditional terracotta of Fez to make the materials 65% lighter. The frame is seismic and foundations have been designed to withstand the effects of the swell. A laser beam with a 30 km range indicates the direction of Mecca for this monument that represents Casablanca.