CINEMA AND NOSTALGIA AT RICK'S CAFE 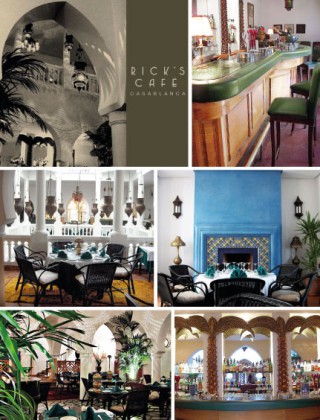 One can’t think about Casablanca without thinking about Michael Curtiz’s film that immortalized the city on the big screen and offered the public a story of espionage and romance during World War II with legendary couple, Humphrey Bogart and Ingrid Bergman.
Kathy Kriger revived the myth by creating Rick’s Café in 2004, in an old house dating back from the ’30s, identical to the nightclub from the movie. The restaurant, bar and table games welcome nostalgic fans of the film in an atmosphere of old fashion charm that highlights the style of the time. Former U.S. diplomat Kathy Kriger says that “this is the project of her (my) life”, with the aim of preserving a certain architecture and sustaining interest in the city and its many facets. The black and white film plays on a loop in one of the rooms upstairs. You almost expect to surprise Humphrey Bogart and Ingrid Bergman kissing on the balcony.