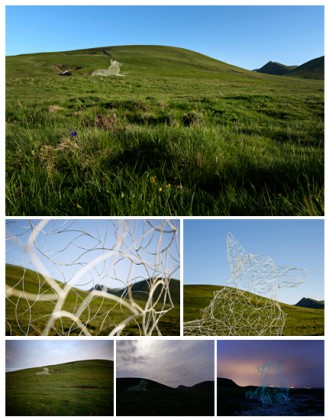 The wolf returns to Auvergne! On 26th January 2013, there were sightings of a wolf in the Massif of Sancy. Multimedia artist Thomas Monin sought to build on this piece of local trivia that crystallises passions in the mountains. Thus, he proposes a monumental work that depicts the silhouette of a wolf in exactly the same location as the real canine was spotted. Comprising of solid metallic rods painted in white, this trellis shows the wolf in a sitting position, like a proud, serene sphinx. The viewer can see through it, as if suggesting that the wolf is not so much an intruder, but part of the landscape. Furthermore, the paint is phosphorescent and the outline of this giant wolf also glows in the dark! In short, Thomas Monin uses this sculpture as evidence, proving to us that the wolf is still very much present in Auvergne. That he blends into the landscape – though not always. But it must not frighten those hikers who can only see its white ghost… “Evidence” by Thomas Monin is on display at Beaune-le-Froid on Mount Margelet, near to the famous Croix-Morand pass.