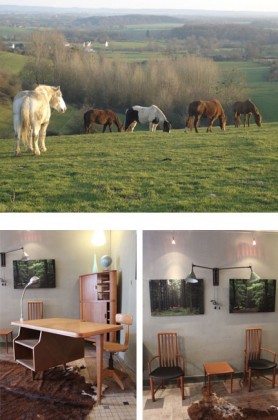 Thought of as the most beautiful village in France, Mortagne-au-Perche consists of largely sixteenth century bourgeois mansions (including that of Henri IV) and mansions from the eighteenth century. Fortunately preserved through the war, the rich architecture of this medieval city begins in the tenth century. 27 sundials, spread throughout the sights of the city are dotted along the cobbled streets leading to the farmer’s market from the main square streets. On Saturday morning, you can stock up on raw goat cheese, local cider and especially black pudding, a specialty of the city.

The town is full of local produce, crafts and notable antique shops such as that of Sylvain Cheriau. In his antique gallery, this lover of design and nature presents exhibitions of nature photography and Scandinavian furniture from the 60s and 70s. Sylvain Cheriau – 06 79 65 18 36

From March 15 to March 17, 2014 – the capital of black pudding, Mortagne au Perche is hosting a fair dedicated to black pudding and other regional products.