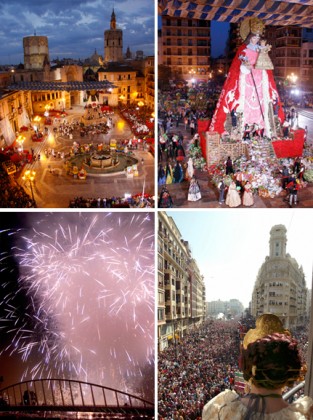 Each year, from the 14th to 19th of March, the city is alive to the rhythm of the festivities of Las Fallas. Immense monuments and statues made of cardboard and wood litter the streets of the entire city. They represent historical scenes, political caricatures and stars of the moment or illustrate the delusional visions of the artists who worked throughout the year to create these giant constructions. Some may reach more than 15 metres high and are very impressive in deed. In every district of the city, the fallas artists receive financial support from the old families of Valencia for whom it is an honor and a duty to sponsor a workshop. Each year, between 400 and 700 of these monuments – each more colorful and refined than the next – are installed in the streets, squares, and parks of the city. At the end of these days of festivity, punctuated by numerous firework displays and concerts, all the fallas are burned. All but one appointed by a popular vote to be saved and join the Museum of Las Fallas. Throughout the night, the city is illuminated by the hundreds of pyres that destroy these works of popular art. An estimated one million visitors flock to the occasion of the festival of Las Fallas. It is sufficiant to say that a reservation with Bernd Knoller and Ricard Camanera should be anticipated well in advance during this period…