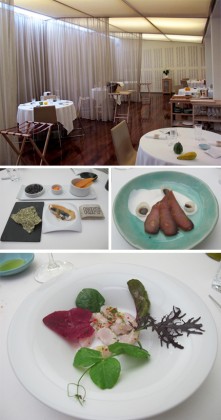 Yes, Bernd Knoller is a German native hailing from the Black Forest, but it’s been almost 20 years since he took his suitcases to Valencia where he is recognized as one of the most inventive chefs in the city. For 8 years, in his restaurant Riff, he is constantly under pressure to produce a menu that is continuously evolving and always seeking to surprise the taste buds of his discerning foodie clientele. Very present in the immaculate white restaurant, situated close to the beautiful Mercado de Colon, Bernd Knoller is a cook who loves to play with whatever produce is readily available to him from the surrounding area. His experimentation will start, for example, with a soda of tomatoes served from a syphon on a thin slice of bacon dipped in herbs…The menu is heavily focused on fish. It features an eel ceviche (a specialty of this marshy area), which is simple but so meticulously treated that this fish – which is prone to an overpowering taste – could pass for sea bass! The bonito, a type of very much sought after tuna, cooked at a low temperature offers an incredibly smooth texture, while preserving it’s very subtle, lightly fatty taste, revived by the black chanterelle that accompanies it. The lamb “à l’arabia” cooked for six hours is simply divine, as is dessert: a soup of very dark chocolate with plums and hot chocolate mousse. Set aside plenty of time to dine at Riff, for the tasting menu consists of 9 dishes and it takes at least two hours to enjoy everything. But when you open the door of this Michelin starred restaurant, time is suspended in an incomparable culinary experience created by the sensational Chef Bernd Knoller!