Stüva restaurant: the stomping ground of the gifted young chef who put the Tirol on the map 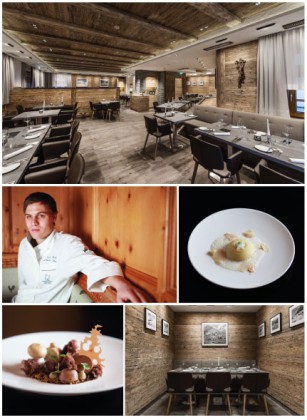 The Austrian ski resort of Ischgl is the epicentre of gourmet cuisine in the Tirol Alps. Here, there is an astonishing concentration of top restaurants. And amongst all these places, there is one that stands out from the rest, thanks mostly to the talent of its young chef, Benjamin Parth. An undeniable genius in the kitchen, this 26 year-old, has already won three “toques” and received 17/20 from the Gault & Millau guide, which covers the whole of Austria. This is a momentous achievement for this cook, the youngest distinguished Austrian chef, who has literally spent his life behind the stove, searching, inventing and testing all sorts of cooking and preparation methods. Like all those that inspire him, Benjamin is not at ease in the public eye and in life in general. But when he takes command in the kitchen, he excels himself and exceeds the boundaries of creativity. Surrounded by his entire family who own the Yscla hotel, in which his restaurant Stüva is nestled, Benjamin Prath pushes his own limits on every level. And you wonder whether, at such a young age, if he will be able to reach new heights of excellence and originality. His cuisine mixes French and Asiatic influences, as well as Tirol gastronomy, all with panache and a disarming simplicity. Still relatively unknown beyond his surrounding area, Benjamin Parth deserves to be swiftly discovered before his reputation explodes before the eyes of the world…