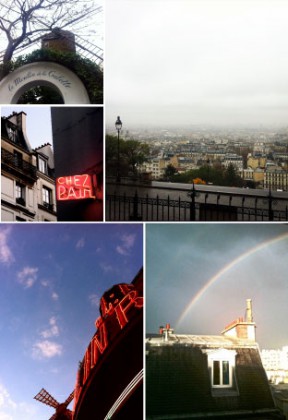 This is far China. Too far for not to panic, fear the worst. And not enough to keep from crying, rehash, share the rumbling anger. It took me three days, 3 X 24 endless hours to land in Paris and find the place that was meant to be mine: close to my loved-ones and all the ones who were mourning their own. This is with a heavy heart, groggy that I l woke up on the first Parisian day after my return. With the striking rawness that nothing would ever be the same. Two days later, as if fate had intimated me to skip school, here i was tracking, forced to climb the hill in the morning. First the Rue Lepic, its back-and-forth, the Café des deux moulins and the atmosphere of Jeunet, Place des Abbesses and the Wall of Je t’aime in 280 langauges. Then the Place du Tertre, desertic, becoming again almost frequentable. The Sacré Coeur, and some astonished tourists that neither endless rain nor recent events have succeeded in discouraging. Finally Avenue Junot and its little coffee that warms you up , chez Marcel, on the angle of the villa Léandre, countryside in Paris. I even find myself making a detour by Le Moulin de la Galette …
This gray morning diluted (a little bit) my anger and each detail found its place in the picture. The things that would have usually made me smile seemed precious on that day, including clichés. Especially clichés. #loveparis