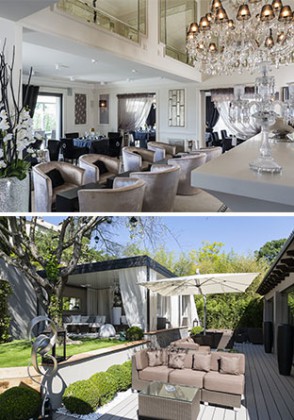 Located in the entrance of the old village of Mougins, the Paloma restaurant received a Michelin star in 2014, during the year of its opening. Housed in a villa from the 60s enjoying a view on the sea as well as on the mountains, Paloma offers you an elegant and refined place to eat … and is a 100% success! We can taste the creative cuisine of Chef Nicolas Decherchi, ex from the Villa des Lys at the Hotel Majestic in Cannes, 1 star, the Louis XV in Monaco, 3 stars, La Chèvre d’Or in Eze, 2 stars … and pastries by Yohan Jara who learned his trade at Potel and Chabot, Pierre Hermé, worked at the Château d’Esclimont and then with Jean-Georges Klein at his three stars restaurant, the Arnsbourg …. We especially appreciate the breaded egg shell with morel powder, accompanied by asparagus spaghetti and morel mousse, foie gras spheres with wild strawberry, accompanied by Selim pepper meringue and brioche crackers, sweetbread accompanied by a morel mousse and liquoriced sabayon with a cassis nougatine, vanilla-whipped … Let’s add to all these good points, a lounge area, a cigar’s room and a beautiful terrace dressed in white veils … last trump: the lunch menu displays a suitable price for the top-quality of the institution (45 E). A. F.-M.
www.restaurant-paloma-mougins.com