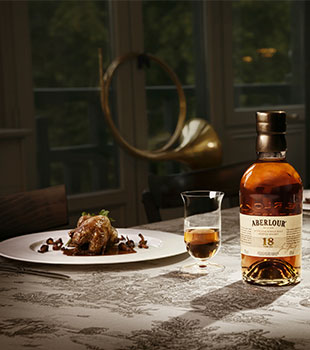 For its fourth edition, the Aberlour Hunting Club is setting up shop for three exceptional evenings in the heart of the Parc des Buttes Chaumont. Overlooking the garden, the Le Pavillon du Lac restaurant welcomes guests for a series of private dinners and is also being transformed into a cabinet of curiosities unveiling a collection of carefully selected rare and surprising objects. In addition, for the first time ever, the Aberlour Hunting Club is to become a temporary bar in the late afternoon, in addition to the restaurant. To celebrate Saint-Hubert, the patron saint of hunters, fans will have the opportunity to enjoy an array of delicious delights created especially for the event by Chef Eric Pras, the three-starred chef of the Maison Lameloise and the recipient of the Meilleur Ouvrier de France award in 2004. Over the course of these three magical evenings, Chef Pras will be imparting some of his special savoir-faire and expertise of gastronomy, in accompaniment to a delicious pairings game of Aberlour single malts.
5th, 6th and 7th of November
www.aberlour.com