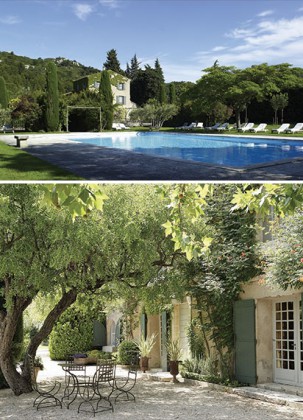 Opened in 1946 in Baux de Provence by a young assistant to the Commission of Tourism, who was none other than Georges Pompidou, this prestigious house celebrates its 70th spring. In no time, the hotel – installed in a former 16th century farmhouse, has become a must-visit, having picked up its first star in 1948, its second in 1951 and a third in 1954! Here, you might have bumped into Humphrey Bogart, Clark Gable, Sacha Guitry, Gérard Philipe, Christian Dior, Winston Churchill, General de Gaulle, the Queen Mother in 1956… Isabelle Adjani, Daniel Day Lewis, Brad Pitt, Vanessa Paradis, Johnny Depp…such a treat! Today, this five-star hotel and member of the Relais&Châteaux boasts bedrooms that look nothing alike. Some have been renovated in a contemporary style with mosaics and wax finishes…others have maintained their former rustic authenticity with enormous wooden furnishings and typically provincial bathrooms. And, for a beautiful finish, a 500m2 spa has been added with 6 treatment rooms bathed in natural light, overlooking a patio, all branded by Valmont and Une Olive en Provence.
A.F.-M.
www.oustaudebaumaniere.com