The Vault mixes tradition and design 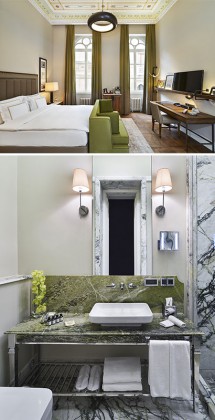 Istanbul boasts an alter ego, and the city hurls itself headfirst into the 21st century, as proven by the international fashion logos and contemporary art galleries that spring up everywhere, whilst remaining closely attached to its traditions. And it is in Karaköy that The Vault, a luxurious hotel comprising of 63 bedrooms and suites, opened its doors a few months ago. Occupying two buildings dating back to 1863, the first is neo-renaissance in style, having formerly housed the Ottoman Crédit General, and the second was previously the headquarters of the Jewish assembly. The architecture maintains its facades, the magnificent stairwell and of course the imposing vaults themselves, from where the name of the establishment originates. Sinan Kafadar, a fan of Renzo Piano, was placed in charge of the décor, knowing how to conserve the spirit of the place, connecting its heritage with modernity with a range of contemporary furniture. And the best bit? The largest suite, number 155, whose bathroom boasts floor-to-ceiling windows, offering an incredible view of the Golden Horn and Topkapi.
www.thehousehotel.com