Dubai prepares to host the biggest fireworks display in the world. 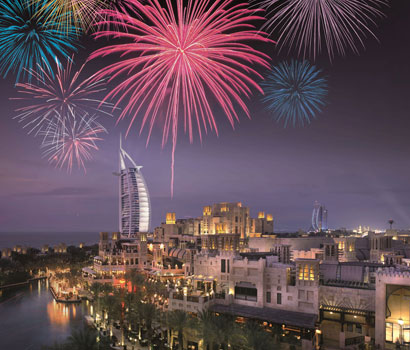 On December 31st, the skyline of Dubai will be illuminated by an impressive fireworks display and in the process will compete for the title of the “biggest fireworks display in the world”. The most famous buildings in the city, such as the Burj Khalifa tower, the Burj Al Arab, The Palm Jumeriah and The Palm Atlantis resort will be at the heart of the festivities. Since its inauguration in 2010, the Burj Khalifa fireworks display, the tallest tower in the world, has been watched by audiences all around the world. This year, the fireworks show is set to be one of the finest. Scheduled shortly before midnight for a period of twenty minutes, the show promises to be the highlight of the year.
www.dubai.fr

© 2023 - Plume Productions
We use cookies to help us better understand how the site is used. By using this site, you agree to cookies. OK Learn more