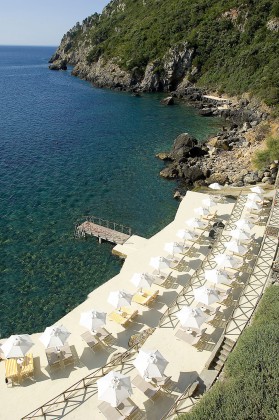 Having opened in June 1965, the Pellicano is the fruit of a romantic tale: that of British army pilot Michael Graham and rich American heiress Patsy Daszel. After much research, they succumbed to the charm of this wild Tuscan hideaway. Seeing as they first met on Pelican Point in California, where more natural to establish their Il Pellicano home! Friends of this charismatic couple included none other than Charlie Chaplin, Henry Fonda, Gianni Agnelli, plus numerous members of European royal families…all before the Scio family bought the Pellicano in 1979. In the main building overlooking the sea, this prestigious member of Leading Hotels of the World boasts 35 different bedrooms and 15 suites, plus 6 cottages of various sizes scattered throughout the gardens. Amongst its other assets, we advocate the double-starred La Cantina restaurant, which is managed by Anotnio Guida, former chef at Pierre Gagnaire, or the more simple Pelligrill serving divine Tuscan specialties, an infinity pool, spa and a developed beach amongst the rock, which is accessed via a lift and a delightful boutique…Il Pellicano: better than a hotel – its an “art de vivre”. A.F-M.
www.pellicanohotel.com