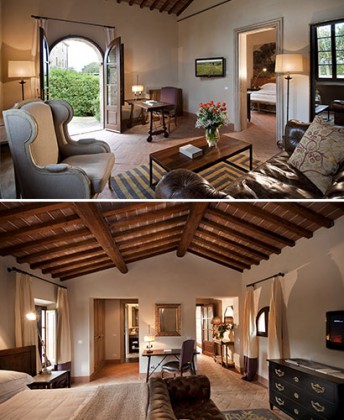 Just 23km from Siena and an hour’s drive from Florence Airport, the 5-star Castel Monaestro, which is a member of the Leading Hotels of the World group, takes over an entire medieval village, which has been completely restored, all-the-while maintaining the same image, in 2009! It is near impossible to imagine a more historically-charged hotel…it is even in the lobby: from contemporary pieces that bring a vital touch of design to the cutting edge pieces on the old stone walls. The 74 bedrooms, which are all entirely different, are spread out amongst the various buildings. Their common denominator? Each offers a pared-down décor across an enormous surface area and a superb view over the Tuscan countryside. Ambra 22, one of the junior suites dominating the piazetta is our firm favourite, with its little alcove above the bedroom, like an attic! Swimming pools have been installed like expansive liquid steps, positioned one of top of the other, inviting you to laze about after agapes in the Cantina situated in the immense arched cellars or outside on the terrace overlooking the village square. A.FM
www.castelmonastero.com