The Baths: a renaissance! 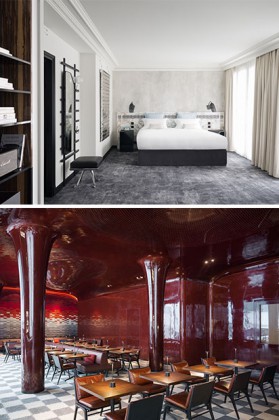 Created in 1885, the Bains Douches (or Bains Guerbois) house the most famous private thermal baths in Paris. This was an intersection for celebrities of its era: Proust, Zola, Manet, Renoir – pretty much the whole of Paris during the Belle Epoque…In a different time and with different customs, in 1978 the Baths became a concert hall, restaurant and popular nightclub! All sorts of people would party here into the small hours: Andy Warhol, Karl Lagerfeld, Prince, Sean Penn, Mick Jagger and so many others… After three years of work and numerous incidents, Les Bains  just have begun writing another chapter of its story. A new story, still not created in Paris and invented by Jean Pierre Marois the home owner. Thanks to the combined talents of Vincent Bastie, Tristan Auer and Denis Montel and Cécile Buhagiar/RDAI, this place has been transformed into a five-star hotel with 39 bedrooms and suites, a bar lounge and trendy restaurants; and let’s not forget the legendary club. In the restaurant, the menu has been developed under the leadership of double-starred chef Philippe Labbé, where you can taste cuisine of Michael Riss who favours, as he does today, seasonal products, knowing that honey served at breakfast comes from hives on the hotel roof! The highlight: the 15m high water reservoir tower, designed to replenish the Baths, which has been turned into a private dining room, the Chinois Salon and the famous untouched underground swimming pool.
A.F.-M.
www.lesbains.paris.com