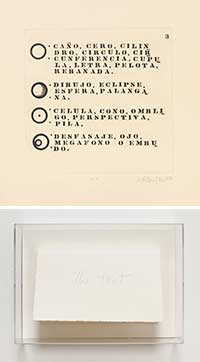 For the first time in France, this exhibition brings together a collection of works from various key periods in the career of the Uruguayan artist.

Taking the complex relationship between image and text as a running theme, the exhibition takes its subversive, absurd title

from Simòn Rodriguez who, in the early nineteenth century, baptized his three children with the names of vegetables and not saints as was the custom. Very concerned about education and learning through the arts, Luis Camnitzer took on the role of an academic advisor, notably in New York where he has lived since the 1950s. Since then, he works as an artist, writer, educator, teacher, curator, theorist and art critic.
Until March 29
www.cortexathletico.com