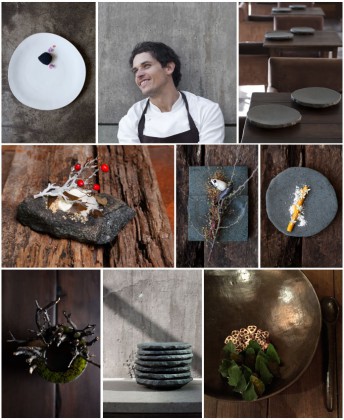 At the heart of the new residential estate of Vitacura, lies Boragó a rare South American gem. Led by chef Rodolfo Guzman (who trained under Adoni Luis Aduriz at Mugaritz in Spain), The restaurant could be the regional brother of Noma or all other scandinavian culinary lab. Passionate for seasonal products, both local or unknown, Guzman harvests, digs up and tracks them just like a gold digger. Using flowers from the Andean plains, crustaceans cooked the traditional way, smoked wood or pureed salicornian berries pruned in patagonias bays, chilian cuisine – which is often poor, bland and nourishing is reborn. Served in a hand crafted stone bowl or on lava coloured plates, these dishes follow one another like a metaphor for nature.
Av. Nueva Costanera 3467, Vitacura +56 22 953 8893.
www.borago.cl