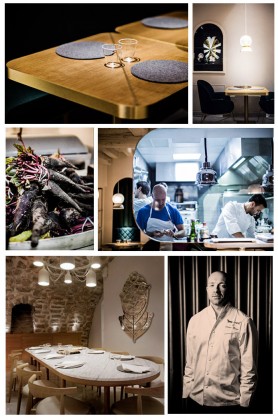 A funny name for a funny place…Le Sergent recruteur is one of the new flagship addresses of the neo-Parisian gastronomy. Set in the heart of Ile Saint-Louis, chef Antonin Bonnet happily mixes bistro recipes with high-quality products and an added touch of originality that makes them extra special. With a conscious respect for nature, the chef strives to only serve short cuts of meat, fish from the nets of the only fisherman allowed to work on the Loire, home churned butter and vegetables that come directly from restaurant’s garden. A luxury previously reserved for only starred restaurants. It must be said that Antonin Bonnet is accustomed to the best: he was at Bras first, before moving on to Baumaniére and the Greenhouse in London. He was also trained at a very good school, which gives him the ability today to offer dishes that highlight the quintessence of the ingredients. To serve as a backdrop to these treats, Jaime Hayon created a design that was in keeping with the philosophy of the chef. While respecting the history of one of the oldest restaurants in Paris, the Spanish designer mixed furniture, lighting and Aubusson tapestry woven by the textile museum in Amsterdam with masks and vases, all of which are unique pieces created exclusively for Le Sergent recruter. A culinary experience based on the good, the beautiful and the simple.
41, rue Saint-Louis-en-l’Isle – Paris IV