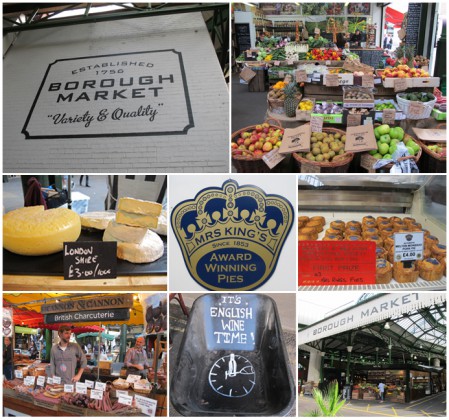 2014 marks 1000 years of trading at Borough Market at the heart of London, playing host to the best market farmers, cheese makers and fishmongers in the country! As the oldest market in the United Kingdom, Borough market is without a doubt the most ancient active food spot in Europe…Strolling amongst the beautifully laid out stalls is a joy for any foodie who can spend a whole morning without ever getting bored. Amidst the rare gems, make sure that you stop off at the Philip Wilton stand. Nicknamed the “urban cheesemaker” for making his cheeses in the Tottenham area and using milk from a farm situated only 50km from the City. If anyone deserves the title ‘London cheesemonger’, it’s him! He only produces cow-milk cheeses, his very own originally named creations. So, for a once-in-a-lifetime chance to taste all this, from London Shire, Howard Blue or Alexandra, this is a must-visit spot. Then, bite into one of Mrs. King’s pork pies, which has produced these multi-award winning pastries since 1853 in a tiny, unassuming boutique. And stop off at Cannon & Cannon, an Artisan British Charcuterie, which sells saucissons in flavours unknown in France: pork, fennel, rosemary and celery pork shoulder, lemon pork-veal or even smoked pepper venison…