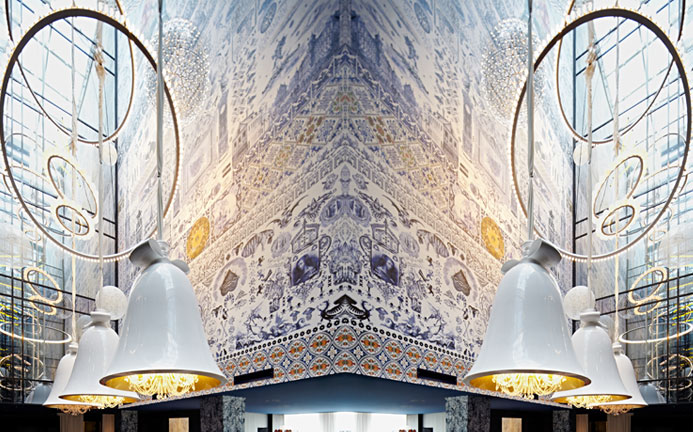 Only recently opened, the Andaz Amsterdam Prinsengracht hotel welcomes interiors and a unique installation ‘The Observatory’ by Dutch designer Marcel Wanders. Here is the opportunity to dive into his vision of a re-enchanted Dutch world. 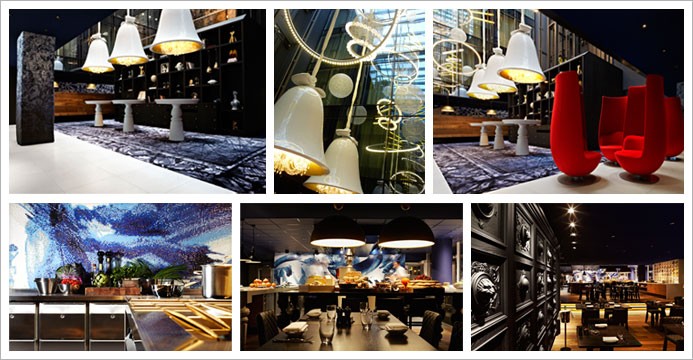 The ego of Marcel Wanders often precedes him. A game that he often masters and draws off the cuff…And yet, when we let the noble profile and the narrow canals of Amsterdam behind to enter the hotel through a small entry corridor, one is seized by the human – and humanist? – scale of the interiors. Rushed towards a central atrium bathed in natural light, we are lead to a theatrical staging that convenes a parallel time and invokes, already, chapters both dark and glorious of Dutch conquests driven by the great trade routes and sea battles.

Playing on the richness of the motifs and the depth of the blue Delft porcelain, a huge mural – perfectly demonic as it represents the world vertically from Heaven to Hell – dresses the main wall of the atrium, accentuating the mise en abyme of this ‘central hole’. At once pulled up towards the roof and crushed by the immense cosmic system which covers the entire ceiling of the building, we find this Observatory, an installation designed by Marcel Wanders, a spatial translation of the ‘Seventh Heaven’. Oscillating between architectural masterpiece, artwork and design composition, the Observatory is apprehended as an unstructured ensemble of spheres and light circles, which haphazardly pull you into the void. 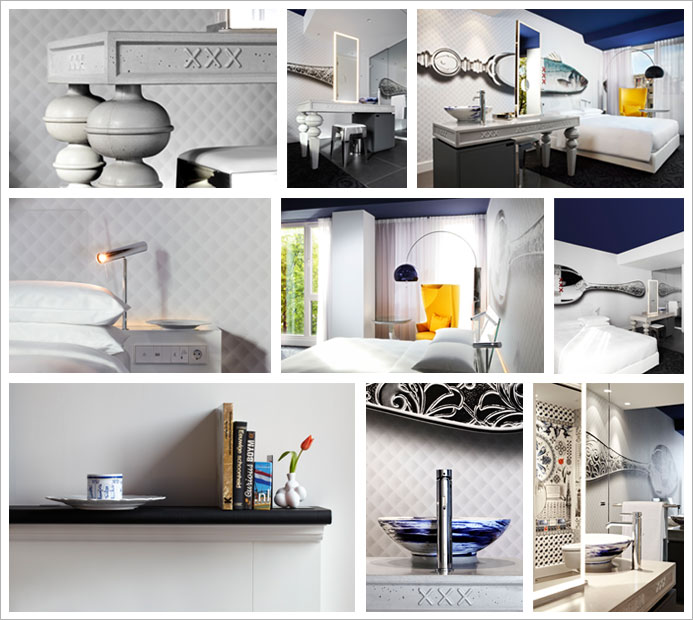 A native son, Marcel Wanders has attempted here to blend sources of inspiration, which in turn reflect the cultural heritage of Amsterdam – from the Dutch Golden Age to the blue of Delft pottery, and the colour of their orange tulips – the creative atmosphere of the neighbourhood and the inseparable bibliophile world from the history of the hotel walls. A successful challenge that extends into the rooms where a “One Minute Delft Blue” hand painted sink – designed by Marcel Wanders – which is coloured blue, as its name suggests, responds to unusual graphic compositions on the walls, as with this spoon which turns into a fish, and vice versa.

A spatiotemporal translation of a historic Amsterdam to present day, the Andaz Amsterdam Prinsengracht hotel follows references with dedication and style, all the way through to the ‘House’ cocktails, which were inspired by the three stages of prohibition – pre-Prohibition, Prohibition & post-Prohibition – bearing utopian names such as “One Minute Delft Blue” and “Lucky Librarian”.

A hotel to experience first hand.