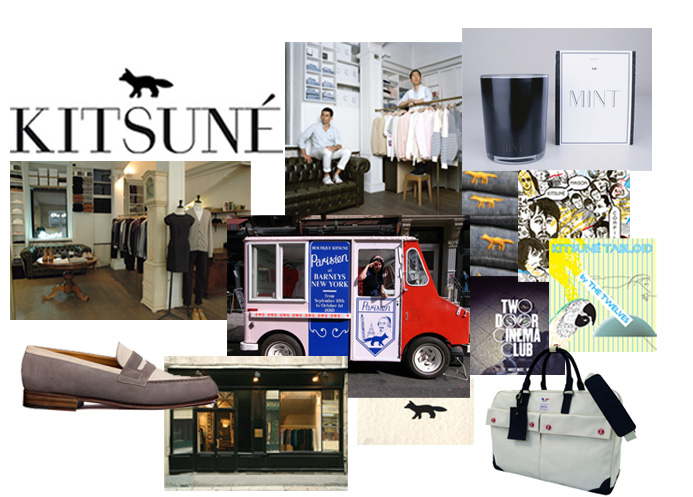 Meetings, meltings, travels and culture shocks have defined the spirit of Kitsuné. Fashion, music, design and tradition give rythm to this independant brand… originally small, now grown up.

One, Masaya Kuroki, French-Japanese who arrived in Paris at the age of twelve, is an architect of formation. The other, Gildas Loaëc, Breton of origin, keen on music was the manager and the artistic director of Daft Punk. First meeting in Gilda’s discs shop Street Sound in Paris, and after having travelled together in Japan to supervise Daft Punk’s cartoon film Interstella 5555, the two stooges create Kitsuné in 2002. The label with the fox logo (« kitsuné » in japanese) combines music, fashion, design and image to its “new classical” style. On the fashion side, Maison Kitsuné knows how to reinterpret the basics. Cardigans with the right cuts, easy-to-wear pants, plaid shirts, tee-shirts, trench-coats, jackets, they are all timeless. The collections slip on the wave of the seasons, and never go out of the fashion. Masaya Kuroki works on the cuts like an architect. The content before the style.

Collaborations with APC, Petit Bateau, Monocle, Pierre Hardy… the last one with JM Weston gave birth to moccasins with this little touch of elegance that changes all. On the music side, through the label’s compilations and singles, Gildas brings out the various sounds of talents worldwide : tracks of Phoenix, Digitalism, La Roux, Housse de Racket or Two Door Cinema Club, among others, keep up the pace of the small fox label, with several hits and compilations. Present in more than a hundred sale’s places between Paris, Tokyo, New York, London in shops, department stores, pop up stores, the small fox also organises special events all around the world in clubs, during concerts.

Last year, the brand offered a sister to their principal store of Palais Royal, in Paris. This smaller concept store named Kitsuné Parisien offers an exclusive collection, featuring the same care for the details, the neat cuts, associated to a traditional fabrication. Producers, designers, artists, the two friends supply of ideas a small UFO “made in world” which seems to be flying over the mass and breaking the standards. Clever like a fox.