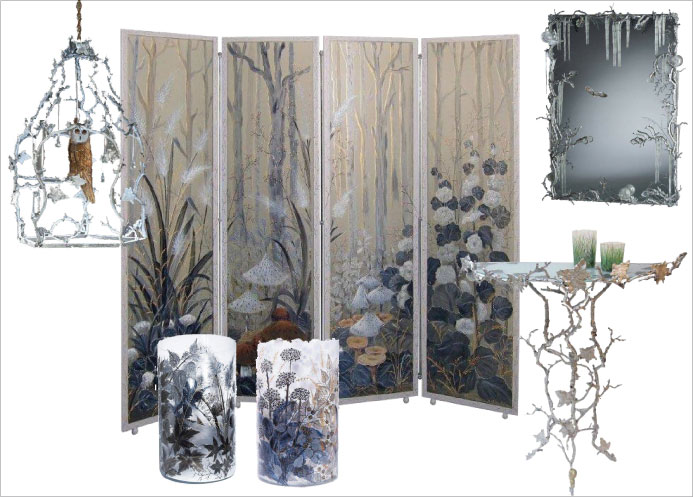 Joy de Rohan Chabot is a great dreamer. Every night, her imagination wanders into extraordinary homes in which drawers and shelves are full of jewelry and fabrics, enchanted and dense forests inhabited by magical animals. Reveries that the designer stages through her precious objects, in bronze, aluminum, painted reveries on glass or lying on lacquer screens. You can now discover her new creations at the gallery Matignon in Paris.

Autumn leaves have fallen. The house of the Parisian designer stands all pink in the middle of this yellow and gold vegetal carpet, behind a wrought iron gate. The workshop is at the bottom. The “green caterpillar eating boxwood”, the latest work of Joy de Rohan Chabot welcomes visitors perched on a cut. “It turns into a moth. I just made it, with cement”. Allusion to the creatures that devoured the box of her Parisian garden, the little caterpillar is part of this new collection presented in Paris. Representative of the different techniques used by the artist, the collection is inspired by winter and its “Enchantment”, frost, the forest of Brocéliande, fall colors and consists among other things of a bronze stool with velvet leaves sewn by hand, a chandelier made of cast aluminum which hosts an silver owl, painted glass vases with graceful silver twigs.

Each technique allowed her to discover a material then find others. First, painting since she was a little girl and then integrating the School of “Arts Décoratifs”, lacquer learned in China and Japan, then the laying of gold leaf, the weld that allowed her to work in bronze, cutting metal plasma and now cast aluminum from lost wax casting helped convey the imagination of this great loner dreamer. And she continues to observe and translate her vision of nature.

Tableware for Christian Dior home, screens for all the nightclubs of Régine, furniture shop for Lanvin, Poiret jewelry, designs for the Monnaie de Paris and Bernardaud … for each command of couture house or individuals Joy de Rohan Chabot reinvents and offers thirty years of her dream world. The Musée Jacquemart André, the Biennale des Beaux Arts in Paris at the Grand Palais, the Orangerie de Bagatelle, the gallery Jorge Elias in Sao Paulo, the Tiffany store in New York, to name a few, exhibited works of this dream artist who also paints anything that is not painted! As her house or her car!