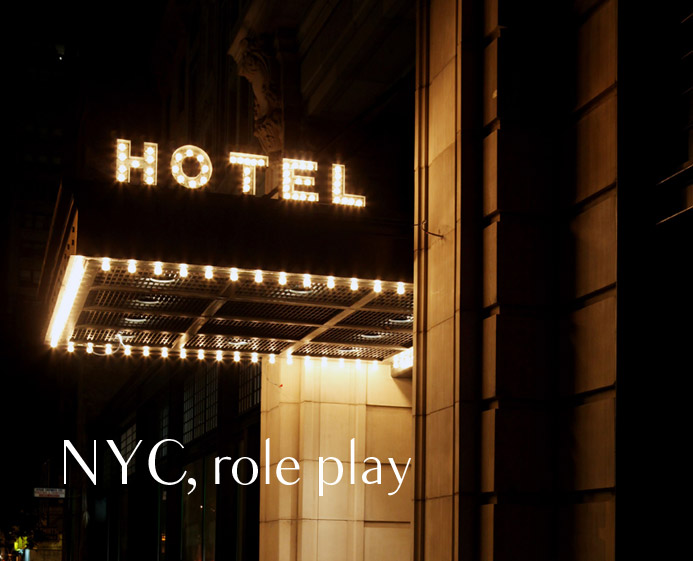 “New York is a world event … New York, strong, proud of herself, in ‘prosperity’ or in ‘depression’ is like an open hand above our heads. New York has a style, a style of …” Le Corbusier, 1938

New York has always been a city of extremes. A city of crises and traumas is also that of all hopes and dreams. Resolutely turned towards the future, it continues to reinvent itself to surprise us, pushing the boundaries, playing the chameleon city to live a thousand lives in one. And what if, in terms of “role play”, we visited the new inspired hotels that are shaping New York today? The choice is yours in this city of endless possibilities, where even the skyscrapers and their illuminated spires seem to say, “The Sky is the Limit”…

So Elegant
There is an Art Deco ambiance from the moment you enter this hotel refurbished by Jacques Grange, where black and white marble punctuates the artistic lobby, only a stones throw away from the Whitney Museum. The neo-bourgeois and lovers from the Upper East Side flock here incognito to relax in the cosy atmosphere. Even if it is only to sample the gastronomic world tour – scrambled eggs with crab meat, buckwheat pancakes, steak Milanese, sashimi of hamachi or Grand Marnier soufflé – orchestrated by the in-house chef Jean-Georges! Photo ©.
The Mark
Madison Avenue at 77th Street
+1 212 744 4300 – From  725 dollars the night
www.themarkrestaurantnyc.com

Casual Chic
In the heart of Wall Street, at the corner of Wall & Water, where the traders plunge, insider trades are plotted, and the heart of Nasdaq vibrates, decorator David Rockwell has combined inspired spaces enhanced by red lacquered surfaces, bamboo walls, marble countertops and a sculptural white staircase made on site by craftsmen from Brooklyn. Part-plane, part-UFO aerospace, it demands upon entry to be the centre of your attention: and with good reason, it leads to the bar, restaurant, spa and basement! A hotel to stay in without inhibitions. Photo ©.
Andaz Wall Street
75 Wall Street at Water Street
+1 212 590 1234 – From 361 dollars the night
www.andaz.com

The little trendy place to be
Only just opened on the border between Soho and Nolita, where achingly hip upmarket boutiques are found on every corner, and little terraces ooze ‘bohemian-bourgeois’ style, The Nolitan is the creative product of a talented young architect name Matthew Grzywinski (GP-Arch). With breathtaking views, from the rooftop terrace, of the Williamsburg Bridge and the white cubes of the New Museum, one simply has to laze on the private sundeck to automatically become one of the coolest kids in the neighbourhood. Photo ©.
The Nolitan
30 Kenmare Street
+1 212 925 2555 – From 250 dollars per night
www.nolitanhotel.com

I’m an Englishman in New York…
Installed in the depths of Soho, in a cobblestone alley between Spring & Prince that conceals an elegant eleven-storey industrial building, the Crosby Hotel is a temple of style designed by Kit Kemp, the iconoclastic aesthete Londoner. With its High Tea – the most popular in NY – its works of art and paintings of thoroughbred dogs and its Screening Room (private screening room) in the basement, the Crosby Hotel attracts actors and directors from the the West Coast, elegant visitors from the East Coast and stateless wanderers from the British coast! Photo ©.
Crosby Hotel
79 Crosby Street
+1 212 226 6400 – From 525 dollars the night
www.firmdale.com

The place to be seen
The latest happening hotel in Manhattan, the Mondrian Soho (the new baby of the Morgans Group) welcomes its guests – between the street and the lobby – with a canopy set up like a large winter garden furnished with rattan chairs, Anduze pots, rustic-chic chandeliers, and ficus. The entirety of Soho flocks here to enjoy the healthy food. In the evening, the same crowd slums it on the blood red sofas of ‘MisterH’, a bar inspired by the decadent Shanghai of the 1930s. Photo ©.
Mondrian Soho
9 Crosby Street
+1 212 389-0000 – From 289 dollars the night
www.mondriansoho.com

Sophisticated simplicity at its best
A crystalline Midtown building, the Setai is the height of sophistication and discretion, designed with quality materials in an atonal color palette, with a hushed atmosphere and attentive butlers. The perfect place to stay in a 200m2 penthouse with stunning views of the Empire State Building. Sheltered from prying eyes, hidden on the first floor, the restaurant Ai Fiori by Michael White awakens the best of Italy during a trip to Liguria, enhanced with French culinary touches.Photo ©.
Setaï Fifth Avenue
400 5th Avenue
+1 212 613-8660 – From 725 dollars the night
www.capellahotels.com/newyork

« Love is meant to make us glad »*
Since its highly anticipated opening, the hotel of 29th Street has revived the fibre of ‘Americana’ design: due to the successful compilation of vintage objects, materials and timeless pieces, it has quickly become the creative benchmark for Manhattan. By inticing a jovial mix of artists and locals, visitors and those that are simply curious, the Ace Hotel is home to a community as eclectic as it is cosmopolitan, found in its lobby-library, its Stumptown coffee shop or the lofts decorated with Smeg fridges, record players, and blackboards. Photo ©.
*message on the Mirror in the bathrooms.
Ace Hotel New York
20 West 29th Street – From 389 dollars the night
www.acehotel.com

A memorabilia hotel
There is an Art Deco feel to this gem located in a building designed by the great Stanford White (two steps away from Times Square) that recalls the crazy times of the end of Prohibition. With a refurbishment carried out by Thierry Despont, The Chatwal Lambs Club is once again the toast of the town: a previous watering-hole for theater people, once legendary in the time of Charlie Chaplin and Fred Astaire, it has been given a new lease of life with its red banquettes, wood paneling and black and white photographs covering the walls and stylish lampposts. Photo ©.
The Chatwal
130 West 44th Street – From 760 dollars the night
www.thechatwalny.com