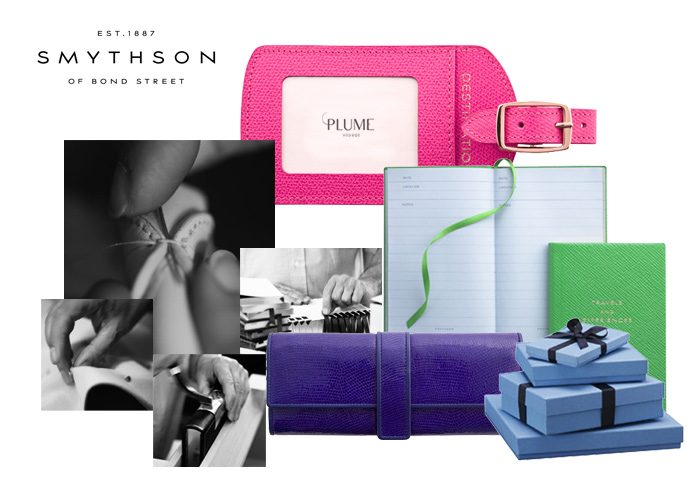 Nestled in the heart of Bond Street, London’s temple of luxury, the Smythson boutique was opened here in 1887. This is where Frank Smythson opened his first establishment, specializing in stationery, leather goods and storage.

Nearly a century and a half later, almost nothing has changed. Smythson still offers those same items that made it successful: products that are simple, functional, understated, and made with exceptional materials. And always with a touch of that famous British humor.

With a discreet luxury and an undeniable level of quality that appeals to even the most demanding of connoisseurs: Smythson is unsurprisingly one of only eight companies to receive four Royal Warrants simultaneously. And because remembrance is an important element of the House, a mini-museum has been constructed in the shop so that customers can discover Grace Kelly’s wedding diary, Princess Diana correspondence stationery, Katherine Hepburn’s diaries, and John F. Kennedy’s condolence book…

Without any nostalgia for the past, Smythson continues to innovate under the direction of Samantha Cameron. She so asked to the Scottish fashion designer Jonathan Saunders to imagine his own line of articles: cases for iPads, notebooks and two-colored diaries. Since her installation, a range of handbags has also appeared, quickly becoming a “must have” for fashionistas. Gwyneth Paltrow easily admits to being obsessed with Smythson products. Even now, all the notebooks and diaries are manufactured in their North London workshops and the stationary accessories in Wiltshire. Only bags and small leather goods are made by carefully selected artisans in Spain and Italy.