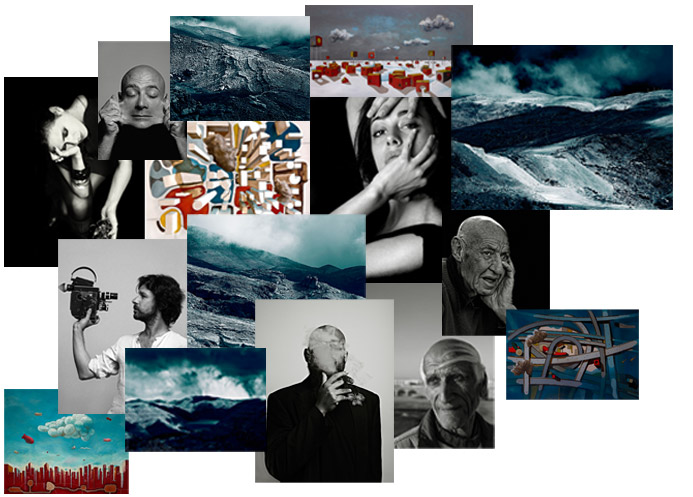 An artist who touches everything, Lebanese Joe Kesrouani is a painter, art director, graphic designer and above all, an excellent photographer.

His portraits challenge, fascinate, and sometimes disturb. Outside the frame and beyond the glossy sheets of film, they speak of the creative Beirut that few know. Of these characters from the shadows that are shaping the capital with pride and talent, with strength and courage. Throughout the pages of “Monochrome 1989-2009”, a collection of photographs in black and white which was recently added to the Maison Européenne de la Photographie, Joe Kesrouani portrays a Lebanese society caught in between certitudes and aberrations. His pictures insist, with each take, the fact that life is there, raw, energetic, full of desires that are freeing the people from the moralities of tomorrow and policies of caution.
For wherever he goes, Joe Kesrouani takes a sharp, harsh look at the world around that surrounds him. Just like the image of this mountain scene taken spontaneously in Faraya, one afternoon when the very violent wind was pushing around some enormous clouds. There was no one in the background, and suddenly the weather turned the sky into a powerful atmospheric landscape of contrasts. It looked like an extinct volcano, smoking, a landscape of the end of world. I do not like easy pictures and there, the light, coming from somewhere else, gave it a whole different dimension, he recalls. In dramatizing his images with Prussian Blue, Joe Kesrouan manages to give them a timeless quality, which will soon be relayed in a gallery in Tokyo.
If Joe continues to paint, creating the graphic identity of things that affect him, and prepares a second book of portraits, he will not, however, be fooled by the cultural void and consumerism that is increasingly prevailing in Lebanese society. And of the stringent prohibitions, especially when it comes to exhibiting his nudes. Often we just see me on the surface of a portrait, and then the conversation moves towards psychoanalysis. Posing nude enables us to overcome these conventions; by suggesting a naked pose, I push people to express themselves, and accept themselves as they are. And not just as they should be, concludes the photographer.
And so Joe Kesrouani is this: he is attracted by the beauty of the French, but deeply attached to his homeland, yet critical of its excesses. He is in search of substance and meaning, in every single one of his actions. He is also a hidden artist, who will work in the light of candles when the electricity cuts out. But above all, Joe Kesrouani is without a doubt one of the driving artistic forces of Beirut who is defying every convention. Except perhaps that of the objective…
Monochrome 1989-2009 was published by Editions 18+
www.18editions.com
Works and photographs by Joe Kesrouani are available at :
www.joekesrouani.viewbook.com