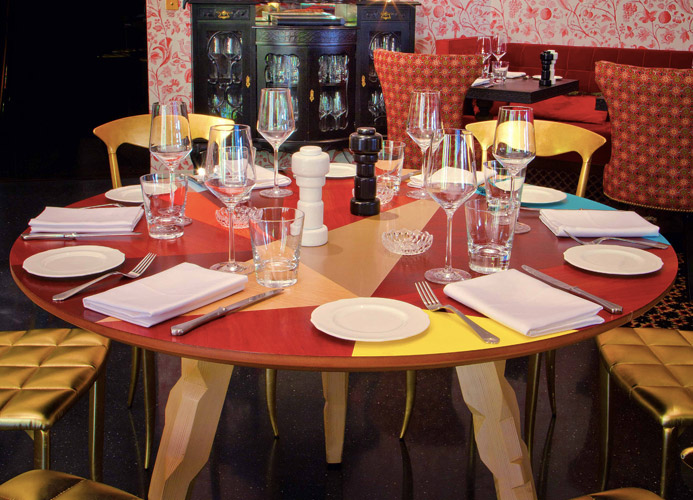 After thirty years of civil war, invasions and occupation, Beirut is reclaiming its title as the Paris of the Middle East.
And a part of this rejuvenation is becoming apparent on their dinner plates. As a result, a number of French chefs have decided to open shop here. Yannick Alléno just opened two dining concepts in the souks, STAY (Simple Table Alléno Yannick) and Sweet Tea. The Pourcel brothers opened their restaurant Yazhou in September in Achrafieh – their first establishment with a 100% Asian menu. Meanwhile L’Atelier de Joël Robuchon is expected to open next year. After Japan and the United States, the Lebanese capital is fast becoming the latest gourmet hotspot. All the while, without denying its own roots and culinary traditions.

Souk-el-Tayeb : The word to the farmers
The organic market of Souk-el-Tayeb (“the market of good things”), created in 2004 by Kamal Mouzawak, puts in the honor the producers come from all the country to sell the best of their exploitations. “I wanted to restore the word to the farmers who are the only ones to be able to speak about fruits of their labour with so much love and passion”, he explains. The result is a fantastic ballad through the various regions of Lebanon, in the discovery of herbs, vegetables and nice-smelling fruits, which we imagine already lovingly cooked by loving hands.
Every Saturday from 9h to 14h.
Beirut Souks – Trablos Street – Beyrouth
www.soukeltayeb.com

Tawlet at the Souk el Tayeb: The kitchen of regions.
An open and generous kitchen, Tawlet at the Souk el Tayeb offers typical Lebanese home-style cuisine. Each day, a different producer or chef shares his recipes, products, and story. Created by Kamal Mouzawak, the “inventor” of the only farmers’ market in Beirut, Tawlet (“table”) highlights traditional regional recipes. It is even possible to attend cooking classes here (for adults and children), to fully experience this important gastronomic heritage.
Set menu for about 20 euros.
Naher Street 12 – Chalhoub Building – Beirut
www.tawlet.com

961
The genesis of 961 is atypical to say the least. Mazen continues to surprise having swapped his war reported cap for that of a brewer. And for good reason too, as founder of the 961 beer company, he remembers stirring the first litres during the 2006 bombings, so suffice to say Mazen never imagined that he would be revolutionising Lebansese – and international – nightlife with a simple quartet of bottles. Grouping together every taste, hop and malt desire of a generation that loves to party, the graphic bottles of 961 represent today, more than ever, change. Text Marie Le Fort
www.961beer.com

Bali-Balima: Merry Mosaics
Located right in the heart of the area that houses all Lebanese designers, Bali-Balima is one of the smallest areas in the souks with only two counters – a bar on one side, with a DJ or jazz bands, and light meals being served on the other. Inspired by the cultural and social life of the Saifi neighborhood, this place mixes atmospheres, materials, and styles. A fragment of the city is transformed into a place for discussion, full of shiny bright objects, refreshing and joyous, colorful and vibrant with an energy that must be experienced. As for the food, the meals created by French chef Olivier Gougeon are simple and tasty, made with products from farmers’ market of Souk el Tayeb.
Set menu from 10 euros.
Beirut Souks – Downtown – Beirut

Burgundy: In Praise of Burgundy
Burgundy is a fine tribute to French wine and especially the great wines of Burgundy. A spacious salon with a pure and refined style and a spirit of modernity where metals, wood and concrete set the atmospheric tone. Hard, yes, but with a soul. In the kitchen, the Canadian chef Brody White prepares a cuisine inspired by his travels around the world, making no concessions when it come to the quality of his ingredients. But it is above all thanks to the magnificent cellar that the magic of Burgundy works: the best Burgundy wines are all served by the glass. And the sommeliers are happy to suggest sumptuous food pairing for diners.
Set menu from 55 euros. Bottles of wine from 35 to 6500 euros.
752 Gouraud Street – Saifi Village – Beirut
www.burgundybeirut.com

Ginette: Gastro design
Opened in December 2010, this concept store is hard to categorize: bakery, cafe, restaurant, exhibition hall, gallery and fashion boutique all come to mind. In a refined environment, you can taste a wide selection of healthy salads, gourmet sandwiches and a broad range of desserts, made by the famous local patisserie, Oslo.
Gemmayze, Gouraud Street – Convivium 05 Project – Beirut
www.ginette-beirut.com

Momo at the Souk: Mediterranean Fusion
Mourad Mazouz has created the perfect meeting point between tradition and modernity. Momo at the Souk overlooks the tohubohu of the Lebanese capital. With Annabel Karim Kassar and Violaine Jantet, he has created a strange paradise where vintage objects, designer pieces and made-to-measure furniture make up a unique and intriguing atmosphere. To eat, all the scents and flavors of North Africa and the Middle East are married with traditional French recipes.
About 40 euros a la carte (not including drinks)
Beirut Jewelery Souks n°7 – Beirut
www.momo-at-the-souk.com

The French spirit is blowing through the Balthus
Upon entering the restaurant, it feels like one of the great brasseries of St. Germain des Prés, as opposed to somewhere just a stonesthrow away from the centre of Beirut. And little on the meny would dispel this impression. From starters to desserts, the classicism, even traditionalism, of French cuisine reigns: leeks with vinaigrette, lentil salad, foie gras, frogs legs à la Provencale, Rossini fillet of beef, Sole Meunier, dauphinois potatoes, tarte Tatin, French toast…you’d better believe it! Fortunately, some key “local” touches give a little character to the place, especially the Balthus-style crab salad and the totally fresh grilled fish. A lovely address for a top quality tasting trip.
About 70 euros a la carte (without drinks)
Ghandour Building – Minaa-el-Hosn – Beirut

Yabani: ultramodern
A Japanese restaurant in Beirut? Yes, but not just any. It can be found on Rue de Damas, the ghostly landscape, which still bears the scars of war, where ultramodern eateries such as Yabani are beginning to emerge. The restaurant is also an architectural attraction as it was designed by the Lebanese architect, Bernard Khoury. It is an underground restaurant that looks like a metal tower with an oval and transparent elevator shaft inside it. From under your feet, the glass tiles allow one to view the interior of the restaurant. The food is nothing very original. But it’s architecturally exciting.
From 10 euros.
Damascus Road – Achrafieh – Beirut